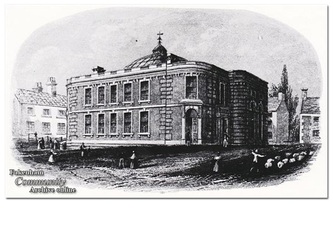 From 1920 until 1976, Fakenham had a total of three cinemas in operation.
The longest running of these was The Central, open from 1936 up until 1967. It has Recently been reopened as a Central Cinema Fakenhm. However, Fakenham’s first cinema began in 1920, as The Electric Pavilion, or The Regal. It had been converted from a drill hall for the T.A., and a skating rink, and after it ceased to show films, it turned into a garage. Finally, Cinema on Norwich Road changed from an old school during the silent era films, and later became a furniture store after its closure.

This beautiful, listed Victorian building was built in 1855 on a site once occupied by the old market cross. A company was formed for the purpose of building it, at a cost of £4,000, raised in shares. The architect was John Brown, of Norwich, who was best known for his churches and was the surveyor for Norwich Cathedral. The Corn Hall also served as a magistrates' court and a library, and we believe there may have been first floor living accommodation for the hall-keeper. The building was converted into a 700-seat cinema in 1930 and was re-named as the Central Cinema seven years later. After closing in 1976 it became a bingo club until the 1990s and lay empty and unused for a couple of years. Extensive repair works were undertaken by architects Nicholas Hills, to restore it visually as closely as possible to the original design and paintwork, and it was reopened in July 2000 as the Hollywood Cinema. it has recently been taken over on the 2nd june 2017 by an independent owner who is giving it a much needed makeover.